The Shift in Consumer Behavior for a Sustainable Future

"Sustainability" is becoming a major buzzword today, as mounting evidence points to more consumers preferring to do business with companies and brands that are more environmentally-focused. While this seems like a good thing on the surface, it's also important to note that sustainability in the consumer's eyes is still very subjective. For example, according to data from the Pew Research Center, the majority of Americans state that they're changing at least one everyday behavior in an effort to become more sustainable. In a separate study, the majority of Americans state that they don't believe the federal government is doing enough to help stave off the effects of climate change.

Yet, despite this seeming paradigm shift to more environmentally-friendly best practices, the amount of waste that is generated remains the same - if not slightly higher - over a period of the last several decades. It seems to indicate proof that while awareness has improved, there hasn't been a change in the amount of solid waste that has been generated. But there are other types of waste that may not immediately jump to mind that can be addressed to make a serious impact in any environmental efforts, and perhaps it's time to focus on these types more. One of them is the increasing amount of food that goes to waste.

Where Do We Currently Stand?

According to Pew, about 80 percent of Americans indicate that they have reduced the amount of food they discard for environmental reasons. However, it's estimated that only about half think that reducing food waste is a significant environmental benefit. We talked about how sustainability and what's considered environmentally friendly is still largely subjective, and the topic of food waste is a huge indicator of this.

In reality, some 40 million tons of food waste is generated each year - and this number continues to tick upwards. In fact, in 2000, it was estimated that Americans generated 0.6 pounds of food waste each day. In 2017, this number jumped to 0.69 pounds per day. That's a trend that's not going in the right direction, and when you consider that food waste is a large producer of methane gas, a greenhouse gas that is believed to be a major contributor to climate change and a warming planet, this is problematic. What's more is that when food is wasted, so too are all of the resources that went into producing that particular food for consumption.

As you can see, food waste is - and continues to be - a major environmental problem. Data from the Flexible Packaging Association estimates that up to one-third of all food produced in the United States goes to waste. Further data indicates that food waste makes up more than 15 percent of all municipal waste. This specific environmental issue is one that needs to be addressed - and addressed quickly.

What Can You Do?

The biggest thing you can do is understand the impact of food that goes to landfill and make a conscious effort to ensure the food you purchase doesn't spoil and that you're not over-serving. Making the food you are buying goes further for you and your family will also save you money at the store. So how is this done? A big assist goes to flexible packaging. Unlike conventional packaging methods, flexible packaging can extend shelf life by several days, and in some cases, even several weeks or months. 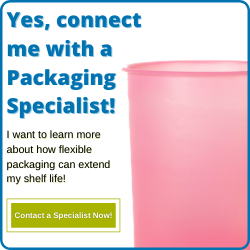 Additionally, flexible plastic packaging features resealable features to assist consumers with cooking proper portions for consumption. It's estimated that two-thirds of food waste arises from spoilage, and the remaining 1/3 are a result of over-serving. Flexible packaging formats directly address these two problems.

It's a good thing that American consumers realize that they can make a difference when it comes to the environment. Still, it's time to refocus those efforts toward a significant issue not getting enough attention, yet with the potential for dire consequences should it continue to be neglected. Studies show that Americans have taken significant steps to reduce their water consumption. It's time to extend that to reduce the amount of wasted food.

Learn more more on how Flexible Packaging can help in the fight against food waste.